Maris was found by the army range warden at Ballykinler's training camp, who telephoned us. She was the smallest pup we had so far found, weighng only 6.5 kg. The name Maris, which means 'of the sea, was given to her in honour of the American TV series 'Frasier', the final episode of which was shown the night before she stranded on June 24th 2004!

Maris may have been small physically, but her personality made up for that in every way. Despite her diminutive size, she was extremely healthy. 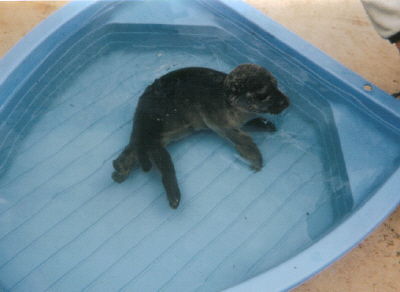 Maris was a very noisy and assertive pup, and it became very clear that what she wanted was COMPANY! One of us would have to spend much tme sitting in the pen with her sleeping across our feet, in order to stop her howling. One day when she had fallen asleep, I gingerly removed my feet from my boots and left her sleeping on the empty boot. Thereafter when we wanted t leave her tp sleep on her own, we had to leave her 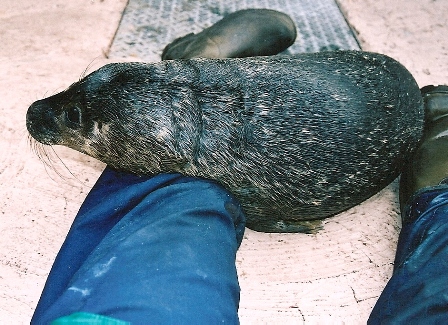 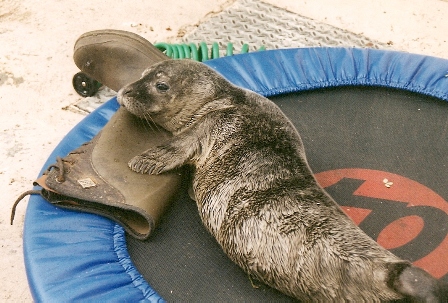 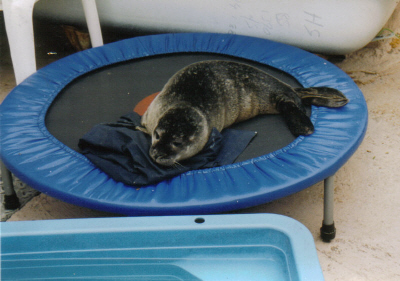 Maris sleeping on our feet (left), on 'Bootmummy' (centre) and 'Trousermummy' (right)

either our waterproof trousers or boots. When she was awake she wanted to sit on our knee (a 'lap seal'!) or want us to play with her in the poo, or bath. Her favourite game - similar to Evie's (in 2001) - was 'flip somersault' in which she would swim up to us, we would gently flp her over in a backwards somersault, and she would return for more, and more....and more.....

Maris sitting on the knee of live 'Trousermummy', who is not very comfortable!

Of course we were worried about her release, since she had been found, newborn and stranded some distance from the colony, and had probably never experienced either her mother or any other seal. And unfortunately (for Maris) we had no other pup in 2004. We therefore decided to take her down to Minerstown before her release and try to take her swimming in the vicinity of the haul-out rocks there, in the hope that she might get some sort of orientation or bearing on the site, and regard it as 'home'. We took her twice for swims at Minerstown on a long rope attached to a harness. The attempts were perhaps not an unqualified success (and rather exhausting, since we had to carry her back across all the rocks at low tide!), but who knows, she might have absorbed something useful to her! 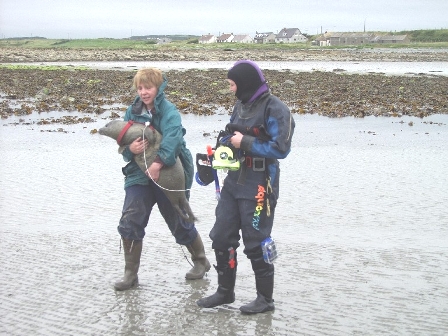 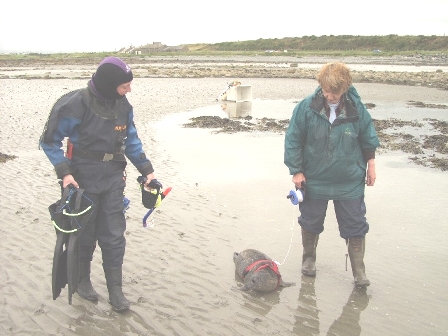 Maris was released at Minerstown on August 10th 2004, weighing 21 kg. The release took a few hours, with our Tara Seal Research team swimming and diving with her in the shallows at the site. She was the last pup to which we attached a VHF tag. As dusk fell she started to swim further and further from us, and finally started to dive and explore properly in Dundrum Bay. 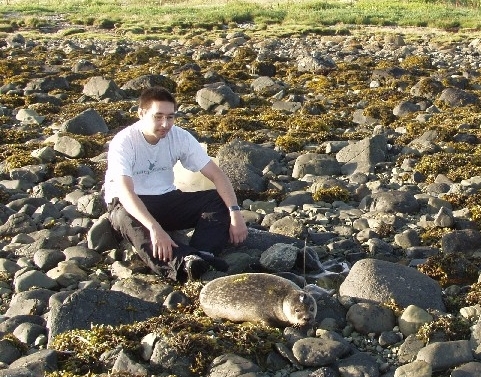 Maris about to enter the sea, Minerstown, August 10th 2004

Maris spent the next day exploring and diving in the outer part of Dundrum Bay, but the following day she disappeared, and weunable to track her along the Co. Down coast. Fortunately, the Irish grapevine is a wonderful thing. WE notified the Irish Seal Sanctuary in Dublin that our pup with a radio tag had gone out of range.

It so happened that, two weeks later, Frank and Kathleen Waters from Portmarnock near Dublin, were taking a walk on Howth pier - when they caught sight of a little seal swimming past them with an antenna at what looked like a rather odd angle. The seal apparently swam past the pier, ignoring all the people on it, and swam off to sea. When Frank and Kathleen returned hom and read the evening paper, they came across a small notice in the paper, very thoughtfully put in there by the ISS, which described Maris, and asked anyone who might have spotted her to get in touch with them. So they did! We then came down to Dublin to try tracking her - and even flew a light aircraft along the coast - but we couldn not get any further radio signal from her. We therefore rather assume that Frank's observation of the aerial not being on straight was correct, and the aerial may have fallen off prematurely. (note that this had happened with Finn and Tinkerbell, the reason being that the tag had not then been coated in a layer of epoxy resin; possibly the same had happened again without our knowledge). At any rate, the grapevine produced no further record of either a sighting or stranding of Maris, so we hope she is still living a happy life somewhere along our coast!