Finn was found stranded on the high tide mark at Minerstown, hot, dehydrated and with a fresh umbilicus on June 28th 2000.
Unfortunately, when Finn arrived at the centre we were unprepared, having dismantled the former makeshift enclosure which had housed Cecilia, Tara, and Caelan in 1996-97. Finn therefore took over our bath and bathroom while a new pool was excavated and a new fence constructed. This did not go entirely to plan, since because Finn was so big, he could climb out of the bath whenever he felt like it......the old bathroom carpet was never quite the same again......

Fortunately, Finn was an easy pup to manage, being a totally docile giant. Again, unfortunately, not having reared any pups over the past two years, we did not have a stock of multimilk and enzymes, which are the essential components of the artificial milk. Until we were able to get more, therefore, we had to improvise a milk recipe with homogenised fish, human baby soy-milk and lactase-treated cream (seal pups should not be given untreated dairy cream because their digestive systems cannot digest lactose).

Although Finn maintained his weight on this makeshift diet, he did not actually start to gain weight for the next 10 days until a fresh supply of multimilk and enzymes arrived. He then gained weight at a remarkable rate, reaching 21 kg on July 27. There was then a further interruption of weight gain while the supply of multimilk failed to arrive...but despite all these vicissitudes, Finn had attained a very respectable weight of 23 kg when he was released with Tinkerbell on August 8th 2000. 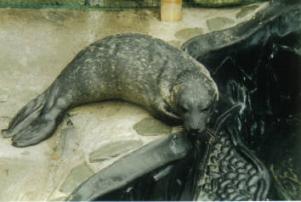 Portrait of Finn beside the newly built (empty!) pool