Because the summer of 2001 was particularly bad for disturbance at their birth site, Minerstown, we decided to release them at Ballykinler, which is another seal haul-out site about 10 km further along the coast. They were both fitted with head-mounted VHF radio tags and released together at Ballykinler on August 14th 2001, each weighing 21 kg.

We reach the Ballykinler shore by courtesy of the Ballykinler army base. On this occasion the pups were carried down on army stretchers to part of the shore near to where the seal colony was hauled out. Unfortunately, the weather was not good on the evening of their release and the two pups seemed a little disconcerted by the small waves breaking on the shore. It took quite a lot of coaxing to persuade them to stay at the water's edge. Eventually Star got the idea that it was a fun adventure, and encouraged Rona to follow her along the edge of the sea. 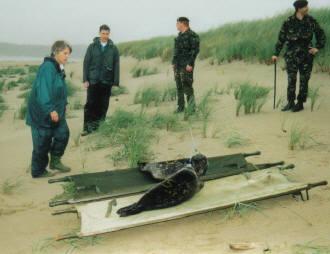 Rona & Star arrived at the top of the beach on army stretchers, August 14th 2001 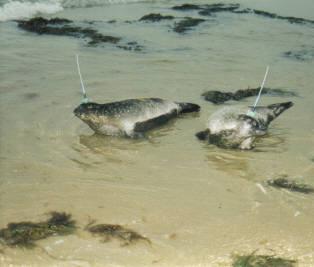 Finally....in the water – "You go south, I'll go north....."
The day after their release, both pups appeared to be engaging in long series of dives of over a minute each. This reassured us that they were at least going through the correct motions of foraging behaviour.
On the first day after release, Star was found to be diving a little south of the release site. later that day, however, she journeyed another 30 km south in the direction of Carlingford Lough. For the next 10 days she foraged mainly off the Mourne coast, just south of Dundrum Bay and on day 11 after release she returned to Ballykinler and hauled out. For the next few days she was again found diving off the Mourne coast just south of Dundrum Bay and on Aug 30 (day 16 after release) she was found to be diving in Carlingford Lough. She remained there until September 5th, then disappeared from range.
We did not check for her south of Carlingford Lough, but we received a retrospective report of a seal 'with a coat hanger on its head' from Donabate, Dublin Bay, on October 1st 2001.

It seemed that both pups went offshore on September 5th, from different points along the coast. It is possible that this movement is prompted by the behaviour of other seals in the colony going offshore to feed towards the end of their moulting period.
Read about Leo