While we had been watching the group of mothers and pups at Minerstown in July 2002, we had seen a pup that did not seem to have any mother for a few days. When Olly was found, we thought he was very possibly that pup. He was very thin when we found him (weighing 10kg), and when we got him back to Tara it became apparent that he was very ill indeed and seemed to have difficulty in moving his fore-flippers. 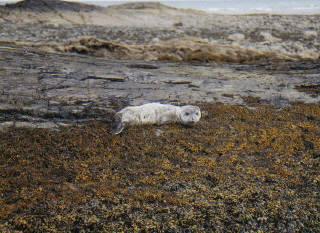 Our vet diagnosed septicaemia, and so he was treated with antibiotics, as well as anti-inflammatories. For several days he lay facing the wall and was quite unresponsive to us or to Evie (the other pup with him in the pen), and did not gain any weight during that time. However, gradually he got better and started to swim , follow Evie in and out of the pool, and sleep with her in the pup 'bedroom'. 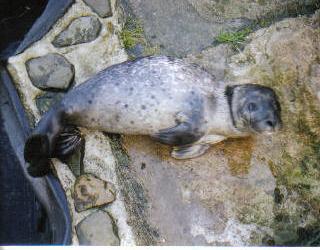 Nevertheless, Olly remained relatively shy of us and was difficult to feed (refusing to open his mouth for the feeding tube!). However, his health, weight and well-being continued to improve so much that he was released with Evie on August 14 2002, weighing 23 kilos. As for Evie, we were worried about the threatening epidemic of distemper virus among harbour seals in the late summer of 2002. We tried to obtain vaccine for them, but were unable to do so. We therefore decided to take a chance that the virus would not strike until they had learned to feed and gone to offshore foraging grounds, where they might escape it. As a precaution, we released them at Tara, about 60 km away from the larger centres of harbour seal population in Dundrum Bay.

Picture to upload
Olly (right, with yellow O dye mark) being released with Evie on August 14, 2002

Unlike Evie (who disappeared around the corner of the coastline on the first night after release), Olly stayed nearby and hauled out with a small group of seals next to the release site. To our amazement, on August 19th he came back into the harbour just below the pen in the company of another, larger seal. They stayed for a few minutes while one of us spoke to them, and then swam off together towards the haul-out site. For some days we had been noting a seal nearby whom we thought was probably Tara (a pup we rehabilitated in 1997, who would have been a young adult of 5 years old in 2002), and we suspect Tara may have recognised his origins from the head tag, and brought him back for a visit!

Olly stayed close by for several days and then moved to a nearby coastal area (Ballyhornan) a few kilometres away, on the SW side of Strangford Lough, where he remained until September 10. He then disappeared out of range – and that is where the most interesting part of his story begins!

On October 29 we received an email from the Irish Seal Sanctuary (ISS) in Dublin to say that they had been called to a seal hauled out on Dun Laoghaire pier (in Dublin Bay), because a lady had seen the head tag, and was worried that he was hurt. The ISS personnel picked him up, because they suspected that he might have the distemper virus, which was killing many seals in the summer and autumn of 2002. They had therefore taken him to a provisional isolation unit in Rosslare, near Wexford. To cut a long story short – Olly started to be his usual difficult self, generally not cooperating with feeding and antibiotic medication! On the morning of October 30, however, he pushed the gate of his pen open, made his way a considerable distance to the centre of Rosslare village, wandered around for a while, crossing the road, and eventually (probably remembering that he was supposed to be ill!) went to the entrance of the medical centre! Here he was apprehended and returned to his pen, but very early the next morning (October 31) he escaped again, this time climbing over the gate! He went through the village and out on to the main road – where he was fortunately not run over, but was spotted by two men going to work, who wrapped him in a blanket and released him into the sea at Rosslare harbour!

Although we realised he couldn't be very sick (judging by the mischief and mayhem he was creating), we were of course very worried that he would be disorientated, since Rosslare is about 160 km south of Dublin Bay, which is the most southerly point of the Irish east coast harbour seals. To our great relief, however, Olly reappeared in Dublin Bay on November 3, therefore taking three days to travel this distance and, amazingly, heading in the right direction. Even more amazingly, he hauled out again on Dun Laoghaire pier! On November 4 ISS personnel picked him up again, because he was attracting an audience on the pier. They were also concerned, because there was another sick seal nearby the pier. This time ISS drove Olly back up north to us at Millin Bay. Here he was given a thorough veterinary check-up (which pronounced him to be apparently thoroughly healthy) and a blood test was taken to test for the distemper virus. He was kept for 9 days at Millin Bay, as a precaution against him possibly incubating the disease (although his blood test later turned out to be negative). During his stay he was very much more energetic and outgoing than he had been as a small pup, even play-biting and 'kissing' his carer! He was full of mischief and difficult to catch – although once caught, he was quite cooperative with the tube feeding process! We were very pleased when, on November 13, we were able to open the gate of the pen at Millin Bay and let him think he was escaping yet again! 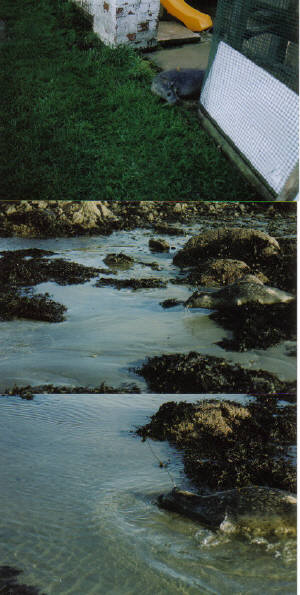 Olly leaving the pen at Millin Bay and making for the sea, November 13, 2002
We were able to analyse two 'poo' samples from Olly, which indicated what he had been feeding on while in Dublin Bay – he had been dining on a gourmet diet of dragonets – these are little fish with enormous spines, which live on the sea bed in deep water. He had also been 'filling up' on a couple of octopuses....We wish Olly a long, healthy and happy life, and hope he will continue to amaze us with his exploits! 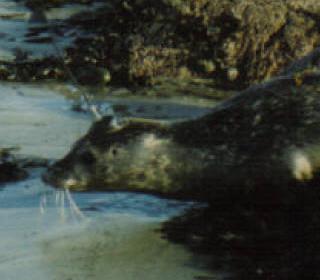 About to take the plunge 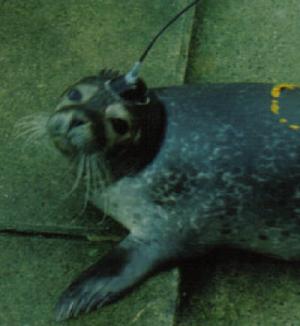 Portrait of Olly while at Tara, November 5th 2002